As there are twelve notes within an octave, it follows that a tenor bell may be described by any of twelve different keynotes. The following table shows the twelve possible combinations for an octave tuned in the major key. 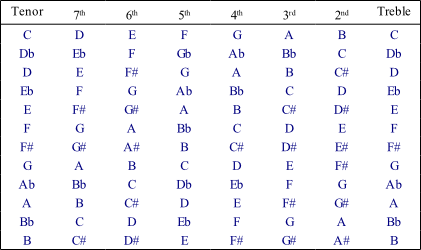 The pitch of a note is described accurately by its frequency, measured in Hertz (Hz), which is the number of complete vibrations of the sound-wave passing a fixed point every second. The higher the pitch, the greater its frequency. Throughout history the relationship between two notes an octave apart has remained as one being twice the frequency of the other. However the relationships between the intermediate notes have changed. The Natural Scale, sometimes referred to as the Diatonic Scale, is based on simple ratios, probably derived from vibrating strings of different lengths. The interval of each note with the keynote is a "perfect" interval. However the semitone intervals within an octave do not have equal spacing. The Natural scale is well adapted to music produced by Church Bells.

A more recent approach is for each successive semitone interval to have the same frequency ratio. Each interval apart from the keynote and the octave above are tempered or mis-tuned away from the "perfect" intervals of the Natural Scale. The resulting Equal Tempered Scale allows the full range of melody and harmony in music, and unlimited modulation to any key. Its introduction was principally for keyboard instruments but has been adopted by modern-day bell-founders for convenience.

As far as bells are concerned, the exact temperament of the tuning is not of crucial importance, as change-ringing bells are confined to melody without modulation. Rings of bells from a particular era, in as much as they could be tuned accurately, would be expected to conform to the temperament in vogue at their time of casting.

Bell notes for a ring of eight in the Major key