A scale is an ordered arrangement of the notes found in the music of a particular culture. The scales found in Western European music all give prominence to the octave which, as Pythagoras found, is the interval between two notes whose vibrating frequencies are in the ratio 2:1. These notes sound similar to the human ear even though one has a higher pitch than the other; they are both given the same letter name, e.g. "C". 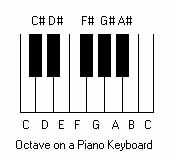 Two "C's" on the piano keyboard are seven  white keys apart and  the term  octave refers to all eight white keys. If the white and black keys are considered, the octave is divided into twelve intervals called semitones. The notes given by the black keys are given the suffix "#" or "b". The sharp (#) sign indicates that the note is a semitone higher in pitch than the note of the preceding letter, conversely a flat (b) sign indicates the note is a semitone lower. Thus the note between C and D may be given as C# or Db.

Some rings of bells are tuned to the minor key, where the semitone spacing from the tenor to the treble of a ring of five bells is: 2,1,2,2 (e.g. notes A,B,C,D,E). Rings of bells in the minor key could be augmented to the major key by adding a tenor bell whose pitch is a tone lower than the existing tenor. In the above example a minor five in the key of A could be augmented to a major key by adding a tenor of note G.