Listen to the Bell 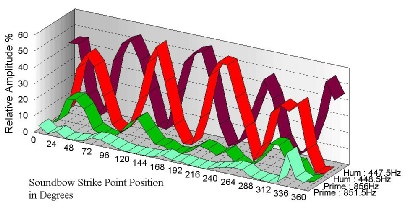 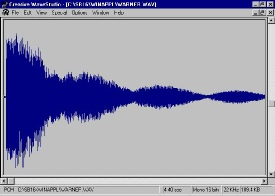 The lack of uniformity of a bell's shape has a considerable effect on the sound of the bell. Partials are usually quoted as individual frequencies, which would be the case for a "perfect" bell. In practice however all partials which have two or more nodal meridians (i.e. all the principal partials) consist of two separate frequencies - which are known as a doublet2. Generally in modern lathe-tuned bells these frequencies are so close together as to be indistinguishable. However in many older bells the frequencies are sufficiently far apart for beats to be heard. A typical example is shown in the table and graph. A 19.25" diameter bell cast by John Warner & Co. in 1855 has been used as the example 19th Century bell. The difference between the two Hum frequencies may be seen as a beat frequency of one Hertz (Cycle per Second). Likewise the Tierce beats at 2 Hertz and the Prime at 4.5 Hertz.

Normally beats are only heard in the long-duration partials, e.g. the Hum, Tierce and Prime. The relative loudness of each frequency pair is dependent on the strike point. It is often possible to minimise the effect for a partial by rotating the bell so the clapper strikes at a point where one of the pair of frequencies is maximised and the other minimised. The figure below shows how the amplitude of individual partials changes with the clapper strike point position. It can be seen there are four locations on the bell 90° apart, which will allow one of the hum frequencies to be at a maximum with the other frequency at a minimum. The other frequency could be maximised by rotating the clapper 45° degrees. The graph also shows the Prime doublet but the peaks and troughs are less distinct. It may be seen that the Prime partial doublet frequency of 851.5Hz is a lower amplitude than the doublet frequency of 856Hz. For clarity the figure only shows the Hum and Prime doublets.

Left: Relative amplitude of doublets for different strike points on the Soundbow for a typical C19 bell

Right: the sound envelope for this bell recorded using Soundblaster.