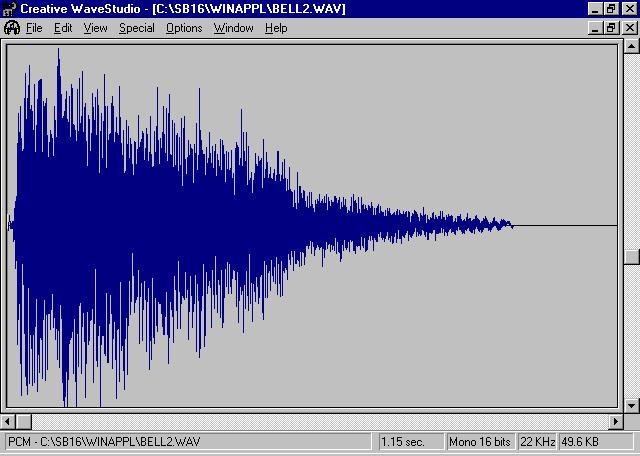 More recently tape recordings of bells have been analysed using Spectrum Analysers or Fast Fourier Transform (FFT) analysis software. The advantages of this technique include a quick recording time (typically three-four minutes for a ring of six bells) and recordings can be made by anyone following a few simple instructions. The major drawback is the record and playback speeds of a typical domestic cassette recorder are often different, and almost certainly will be different if played back on another recorder. Speed differences of up to 2% are common. This problem is greatly reduced by recording a tuning fork before and after the bell recordings. A compensation value can be calculated from the tuning fork's actual frequency and recorded frequency. The preliminary analysis results can be multiplied by the compensation value to give the final results. Trials using camcorders have shown record/playback errors of less than 0.01%, thus obviating the need to record a tuning fork.

Sound of Bells – Analysing the Sound of a Bell

Traditionally a bells partials have been found by using a set of tuning forks. Unless the practitioner is highly skilled, this can take some considerable time. The principle is quite simple, a vibrating tuning fork of the same or a close frequency to a bells partial can cause sympathetic vibrations in the bell if placed on the soundbow (Nominal, Prime, Tierce and Hum partials) and mid-waist for the Quint partial.

Over the last two or three decades, variable frequency oscillators (some with digital displays) have been used in place of tuning forks. Their main advantages are that they are relatively cheap, easily and quickly adjustable and can be set to precise frequencies. This type of equipment is usually AC-mains powered and often not readily portable and its use is normally confined to bellfounders/ bellhangers premises. However this has not stopped enthusiastic amateurs from achieving accurate results in a bell chamber.